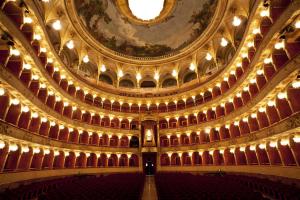 Throughout his career, Giuseppe Verdi created bewitching musical dramas peopled with convincing flesh-and-blood characters. But with Rigoletto he surpassed even his exceedingly high standards. Inspired by Victor Hugo’s play, Le roi s’amuse, whose protagonist the composer deemed worthy of Shakespeare, Verdi invented Rigoletto: at work, the jester who never misses an opportunity to heap scorn on the victims of the womanising Duke of Mantua; at home, a loving father desperate to protect his beautiful daughter, Gilda.

Happy to indulge the Duke as he wallows in others’ misery, Rigoletto is then fooled by other members of the court into delivering Gilda to Mantua on a plate. Now that the Duke’s execrable behaviour has been visited upon the one person he cares for, Rigoletto’s thoughts turn to murder and a local assassin, Sparafucile, has made it clear that he is available for hire. Rigoletto, however, has not reckoned with Sparafucile’s lack of scruples and Gilda’s misguided love for Mantua.

First performed at the Teatro La Fenice in Venice on 11 March 1851, Rigoletto became another cause célèbre for Verdi. He prevailed, assuaging the censors’ fears that the opera would humiliate the aristocracy. It seems as if the composer felt compelled to take such risks with his livelihood in order to create great music. Rigoletto is special because of the way its melodies, often light and breezy, beguile us because we know that something darker lies beneath: Mantua’s upbeat “La donna è mobile” is rendered eerily sinister by our awareness of the way in which his lechery destroys others’ lives; Gilda’s gorgeous aria “Caro nome” reveals an innocence that is almost painful to hear because we know she will be betrayed by the Duke’s real intentions.

But Rigoletto’s tour de force, which audiences at the Rome Opera House will be looking forward to with relish, is the quartet in the third act of this stupendous work, “Bella figlia dell’amore”, sung by Gilda and her father together with the Duke and Maddalena, Sparafucile’s sister. Each character brings a distinct perspective to the music: Rigoletto desperate to show his daughter Mantua’s true colours; the Duke cavorting, as usual, with yet another woman; Maddalena, happily complicit; and Gilda still looking at the Duke through rose-tinted spectacles.

Ultimately, there can be no better recommendation to see and hear Rigoletto than that of Victor Hugo himself. Verdi may have been grateful to the French writer for providing him with the narrative for what is arguably the greatest of his tragedies, but it was Hugo who was left convinced that Rigoletto had trumped its source, the author acknowledging that Verdi, through opera, had given the drama a power beyond that which could ever be created by the spoken word of theatre.