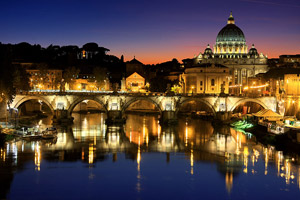 The premiere of La Traviata on 6 March 1853 at Teatro La Fenice in Venice left its composer Giuseppe Verdi in deep doubt: was the minor fiasco because of the singers, or was his work not up to muster? From today’s point of view, the question sounds more than silly. La Traviata is one of the best known and most performed operas in the repertoire, and people from all corners of the planet can hum at least one of the famous melodies in its score. The work’s staying power owes much to Verdi’s indubitable gift but also to the emotional and melodramatic story that is instantly relatable. This season, Flaiano Theatre in Rome pays tribute to this masterpiece with a faithful and engaging rendition.

As many other great works of art, La Traviata has strong roots in reality. The main character – the Parisian courtesan Violetta Valéry whose life of parties, romances, and adulation is cut short by tuberculosis – is based on the historical figure Marie Duplessis. Alexandre Dumas fils had a fervent affair with Marie, which inspired him to write the novel and play La Dame aux camélias. It would become Verdi’s source text for La Traviata (or ‘The Fallen Woman’ in English), with the help of famous librettist Francesco Maria Piave. Despite various obstacles, ranging from Venetian censors to poor casting choices, the opera quickly established itself after the initial misfire, and it enjoys undying popularity to this day.

At the heart of La Traviata is the seemingly doomed love between Violetta and the young, pure-hearted Alfredo Germont. Initially cynical and loner by choice, the Parisian courtesan allows love to creep into her heart and blossom there. The idyllic romance does not last long, however, when the patriarch Giorgio Germont intervenes to break it up for fear of defamation and social ridicule. Will Violetta choose her newfound love, or will she conform with society’s antiquated, false morals? Rome’s Flaiano Theatre tells the full story.