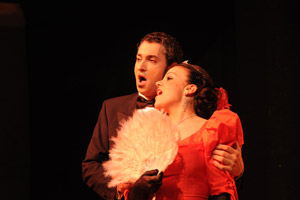 Don’t miss this classic Italian opera during your stay in Rome. La Traviata is the most famous work by the great Italian composer Giuseppe Verdi - performed masterfully by the orchestra and chorus I Virtuosi dell’opera di Roma.
La Traviata – an opera in three acts with libretto by Francesco Maria Piave and heavily inspired by The Lady of the Camellias by Alexandre Dumas, fils– was premiered on 6 March 1853 in Venice’s Teatro La Fenice. After having limited success initially, La Traviata went on to become one of the most performed operas worldwide.
The action takes place in Paris in the middle of the 19th century and follows the story of Violetta Valery, a famous courtesan suffering from tuberculosis. During a party celebrated at her house, she falls in love with Alfredo Germont.