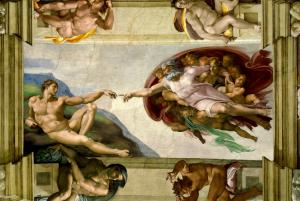 If you are going to visit Rome, you will almost certainly want to make time for the Vatican City. This guided tour will enable you to contemplate some of the must-see gems that can be found within this tiny state: the Vatican Museums, which include the Sistine Chapel, and St Peter’s Basilica.

Following your guide – who you will be able to hear easily via a headset, making the visit more comfortable – you will have priority access to the Vatican Museums, with the cost of entrance included. You will explore the different rooms which, together, contain one of the most impressive art collections in the world, including pieces that date from ancient civilisations up to the present day. Tapestries, maps, paintings, sculptures and papal jewels are some of the works of art on display here. The Rafael Rooms are a key feature: four halls decorated with frescos by the Italian painter and his disciples. But the highpoint of the Vatican Museums is undoubtedly the Sistine Chapel. As well as its well-known role as the place where the cardinals choose the next Pope, is it even more famous for its decorations of fresco paintings. Of these, Michelangelo’s masterpieces on the ceiling and on the altar wall stand out in particular. Nonetheless, the other frescos are also of great interest, including works by Renaissance artists such as Botticelli, Perugino and Ghirlandaio, among others.

The second, but no less interesting, part of this tour is a visit to the breath-taking Basilica of St Peter in the Vatican. After being in construction for 150 years – during which master artists such as Bramante, Rafael, Sangallo the Younger, Michelangelo, della Porta and Maderno participated – the Basilica was consecrated in 1626. Bernini would later realise the construction of the monumental column in St Peter’s Square. Built on top of the apostle’s tomb, St Peter’s Basilica is every bit as impressive inside as it is outside. On entering, you will be able to contemplate – alongside all of the rich decoration – some other renowned masterpieces, such as Michelangelo’s magnificent sculpture Pietà (Piety) or Bernini’s incredible Baldachin.

After this rich and in-depth experience of art and culture, which lasts about three and a half hours, your guided tour within the Vatican will come to an end, giving you the chance to continue enjoying the rest of the day in the world’s smallest independent state.